During the summer of 2015, my wife, Chris, and I walked 500 miles across northern Spain on an ancient pilgrimage trail called the Camino de Santiago.

This Camino page is a document of that journey.  It’s also a gift.  It’s for all the wonderful pilgrims Chris and I met and walked with.  Thank you to everyone for your encouragement, stories, laughter, conversations, and community.  I hope these words and photos bring back fond memories of a beautiful walk and new Camino friendships.

Of course, if you weren’t hiking the Camino Frances, from St. Jean to Santiago between May 27th and June 30th, 2015, you’re also welcome to look around!

I haven’t yet finished the writing for all the sections in the left hand columns below.  In fact, I’ve just recently realized that I hadn’t done this yet–so I’ve been working on the Week 1 section.

But, the photo galleries (below, on the right) are updated and ready to go.  Just click on the Photo Gallery links to view photos from each of the five weeks Chris and were hiking.  Buen Camino! 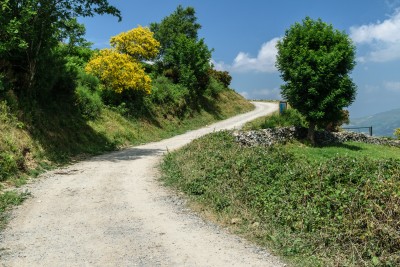 The idea for this page didn’t originate until I had started the walk. Inside my backpack, I carried a notebook because I knew I wanted to keep a journal.  Around my neck, every step of the way, was my Nikon D5300.  I’m an amateur photographer, and I love to take pictures.  Strapped to the side of my pack, to the surprise of many of my fellow hikers, was my tripod.  There are some situations where you just have to have a tripod to take a picture–and I knew I’d be sorry if I left it at home.

I figured the writing and pictures would be, primarily, a way for me to capture the memories and stories for Chris and me.  The pictures would also be a way for us to share the Camino experience with our friends and family who were curious about what we were doing–why we were hiking 500 miles across Spain.  But something changed along the way. 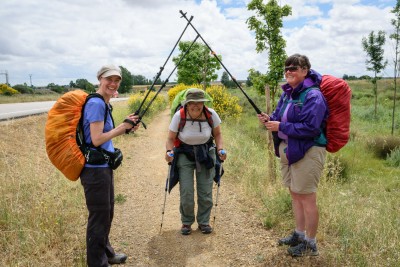 Whenever I photographed pilgrim buddies, I also collected email addresses.  I wanted to be able to email photos (which sometimes included group selfies, taken with the tripod) to my new friends.  Before long, I started hearing the question, “Steve, what are you going to do with all your photos?  You are going to put them online somewhere so we can see them too, aren’t you?”

So, partway through the Camino I decided that after I’d gotten home and emailed the pictures I’d promised to Camino friends, I’d sort through my photos and pick out my favorites to share online.  That also involved the intermediary step of emailing recognizable people in the photos to ask if it was OK if I shared their images in this way. 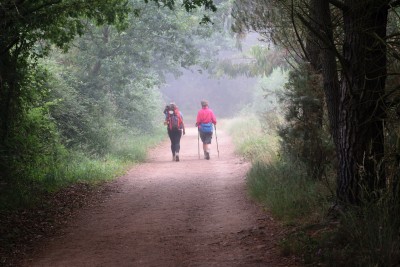 Then came the job of picking out the images.  It’s not any easier to pick out a few hundred favorite Camino photos (from 5,000 images) than it is to try to describe the Camino experience to someone in a few minutes.  But, I’ve tried.

To help organize things and make it easier to look at specific parts of the journey I’ve divided the trip into five weeks.  Each week begins with the place Chris and I started and ends with the place we finished.  These are unlikely to exactly match the starting and ending points of other pilgrims who were also hiking at the same time, but it seemed like a reasonable way to divide things up. 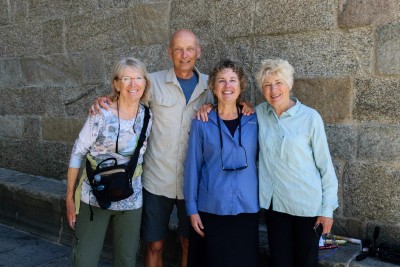 Ann and Susan have created a wonderful video called OneWordCamino.  It includes clips from many of the pilgrims who were walking with us.  You can find it here. 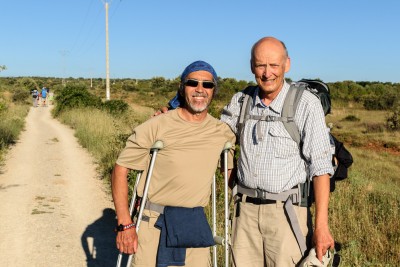 Chris and I met Tim and his sister, Tara, in St. Jean–where we all stayed in the Beilari albergue the night before the first day’s walk.  Tim and Tara stayed in Orisson the first night, while Chris and I went on to Roncesvalles.  So we got a bit ahead of them.  On the second day of the trip, Tim’s knees gave out on the downhill into Roncesvalles.

Tim walked for about a week in pain before he saw a doctor.  He was told to rest and ice his knees, but that didn’t help.  He took a bus to Burgos, where he saw another doctor.  That doctor told Tim his Camino was over–that he should go home.  But, Tim was determined to make it to Santiago. He and Tara went to a medical store, bought some crutches, and they kept on going.  The picture above is where I met up with Tim again on the trail.

Not only did Tim and Tara make it all the way to Santiago, but they then walked to Finisterre.  And, after that, they took a bus to Porto and walked back to Santiago on the Portuguese Camino.  Tara made a wonderful video about the journey she and Tim took together that you can see here.  It’s called Tim’s Camino 2015.  Be sure to read Tara’s notes below the video.

For a second video about Tara and Tim’s trip on the Portuguese Camino, check out Camino Portuguese 2015. 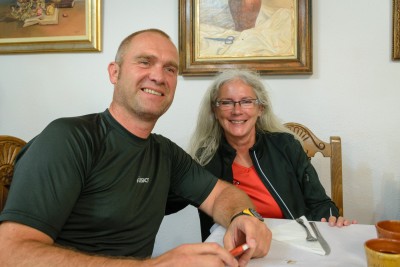 I think we first met Robert and Silvia (Austria) at dinner in Boadilla del Camino.  They have posted a video with the story and many wonderful photos of the their journey.  You can find it here: Faszination Jakobsweg. 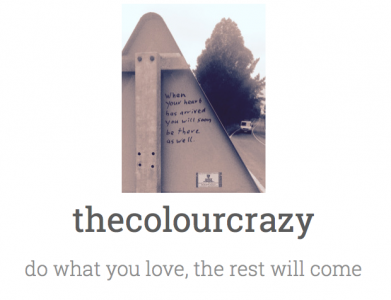 Those of you who met and walked with Jacobie, from South Africa/London, can keep up with her remarkable post-Camino adventures here.  Her blog describes her work as a volunteer at The Abbey of Eskirotz and Ilarratz, just outside of Zubiri–and her subsequent journey to Nepal to help with earthquake rebuilding efforts.  Her blog is called thecolourcrazy.